App’s success is proven by 4512 downloads.

Originally written in 1706, Matthew Henry's six volume Complete Commentary provides an exhaustive look at every verse in the Bible.

Matthew Henry's well-known six-volume Exposition of the Old and New Testaments (1708–1710) or Complete Commentary, provides an exhaustive verse by verse study of the Bible. covering the whole of the Old Testament, and the Gospels and Acts in the New Testament. After the author's death, the work was finished (Romans through Revelation) by thirteen other nonconformist ministers, partly based upon notes taken by Henry's hearers, and edited by George Burder and John Hughes in 1811.

Henry's commentaries are primarily exegetical, dealing with the scripture text as presented, with his prime intention being explanation, for practical and devotional purposes. While not being a work of textual research, for which Henry recommended Matthew Poole's Synopsis Criticorum, Henry's Exposition gives the result of a critical account of the original as of his time, with practical application. It was considered sensible and stylish, a commentary for devotional purposes.

Famous evangelical Protestant preachers such as George Whitefield and Charles Spurgeon used and heartily commended the work, with Whitefield reading it through four times - the last time on his knees. Spurgeon stated, "Every minister ought to read it entirely and carefully through once at least."

Henry's reputation rests upon his renowned commentary, An Exposition of the Old and New Testaments (1708-10, known also as Matthew Henry's Commentary on the Whole Bible). He lived to complete it only as far as to the end of the Acts, but after his death other like-minded authors prepared the remainder from Henry's manuscripts. This work was long celebrated as the best English commentary for devotional purposes and the expanded edition was initially published in 1896. Instead of critical exposition, Henry focuses on practical suggestion, and his commentaries contains rich stores of truths. 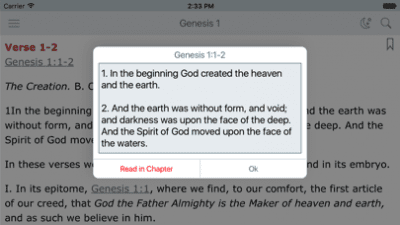